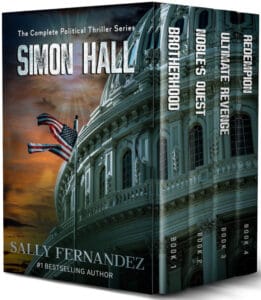 “A breathless excursion into the vagaries of governments – First Class Series!!! Author Sally Fernandez has enjoyed success in her banking career with Citibank and JP Morgan in New York City, San Francisco, and Hong Kong, and now pens political thrillers that draw on her skills in computer technology and business consulting. She and her husband are adventurers – a scientific expedition in Antarctica, on African safaris, archaeological expeditions in Peru and Majorca, and climbing in Bhutan, Tibet, and Mongolia. Her books to date – The Max Ford Thrillers, and The Simon Hall Political Thriller series (BROTHERHOOD BEYOND THE YARD, NOBLE’S QUEST, THE ULTIMATE REVENGE, REDEMPTION). The novels in this series are so sound that they plead cinematic adaptation.

Simon Hall is the leader of the enigmatic group of scholars known as La Fratellanza (The Brotherhood) and brings an intellectual game into real life by involving the election of a president, the banking crisis, international terrorism, Interpol, the threat of economic devastation, and the hunt for Simon never ceases as he continues to unleash diabolical plots in the US and abroad – from the streets of Florence, Italy to the highest seats of power in Washington D.C. Sally Fernandez has created an inimitable character in Simon Hall and the manner in which she directs him through dangers and challenges is exemplary writing. Not only does this entire series fall into the ‘page-turner’ category, but it also sheds light on the political arena on the stages of the world today! Highly recommended.”

“Crime Thriller TV in Book Form. Simon Hall: The Complete Political Thriller Series by Sally Fernandez is the entire four-part series of an intense, action-packed political thriller. At first, I was skeptical about this thriller being revolved around politics, but I actually found it quite entertaining. The politics are fun and do not distract from the entertainment of the novels themselves, which I appreciate. Each book individually is not too crazy long but it still took me a while to get through the entire series. I looked forward to each book, and each one reminded me of the crime shows that I often like to watch on TV. But this one in book form!”

“A seamless read that kept me coming back. Simon Hall: The Complete Political Thriller Series by Sally Fernandez gives you the complete story all at once. Simon Hall begins a brotherhood of scholars from the renowned Harvard. Each man brings a unique skill to the table, along with loyalty. La Fratellanze was born as a game but evolves into something more dangerous. The author skillfully takes you down paths of terrorism and a game of political cat and mouse. When Simon appears to be caught, it twists into another avenue of suspense. The brotherhood finds them sought for other reasons. Political thriller fanatics will enjoy the fast-paced this set takes as you go from one book to the next. I found this an addictive reading experience.”

“Interesting political thriller. This is the full box set of books 1 through 4 of the Simon Hall series. Simon is a leader of the brotherhood, a “behind the scenes ” organization that has political and economic interests and ties almost everywhere. Utilizing those connections to pursue their goals is the main game in this book from elections, presidential politics, economical issues, and terroristic threats, all situations are on the table to be tweaked by Simon and his group.

I think this was an interesting take on the political thriller genre. Certainly, I haven’t seen books laid out in this specific way before. This unique approach made it easy to fall into the story and made you believe you were right there with them, giving speeches, running figures, and dodging bullets. I would give this author more of my time to see what other books she has out. I liked her character-building approach very much.”