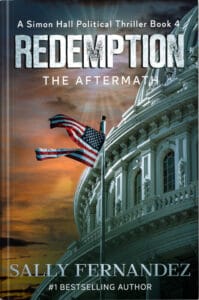 It was April 2017. The nation was gripped by the shocking news that Simon Hall, the notorious terrorist, had leaped to his death off the Peace Bridge in Buffalo, New York. Moreover, the fact that the body had yet to be recovered raised doubts among many. Had Simon cleverly eluded his captors once again?

But for the newly-elected president, there were greater threats looming. President Randall Post had inherited a rapidly sinking economy that brought chaos of gargantuan proportions. And with the push for global governance threatening America’s sovereignty, the country was in dire need of solutions.

Meanwhile, the American populace was clamoring for a full governmental offensive on the clear need to create more jobs. The economic sinkhole had been accelerated by the paucity of employment throughout the country, which was largely ignored by the former administration in favor of their agenda. Internationally, a loss of esteem, coupled with a rising support of global governance among powerful forces, gave birth to a prediction of a permanent decline in America’s stature. Unrest among the masses had surfaced in frequent demonstrations against the government, many of which included violence. There was a blatant crisis of confidence facing the nation.

The increasing turmoil threatening the future of the U.S. was addressed head-on by the newly-elected president. He filled the leadership void boldly and without hesitation—but he needed of the support of the American people. The downtrodden mood that permeated the society forced his primary objective to design a strategy to address the crucial need for more jobs. Borrowing a page from the Manhattan Project, the president’s chosen course was to assemble some of the country’s best minds to offer solutions. The clandestine group known as La Fratellanza was enlisted to fulfill the role. Their superior intellectual skills and experience as Washington insiders, made them eminently qualified to meet the President’s needs. Noble Bishop, director of the States Intelligence Agency was tasked to bring them together and to provide the leadership and guidance. The timetable had been set. To deliver on the immediacy of his stated goals, the President expected an overall strategy in only sixty-five days—a challenge of overwhelming dimensions

With the country’s sinking economy and sovereignty in peril, can President Post rescue America?