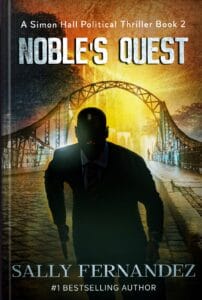 Fresh on the heels of her acclaimed first novel Brotherhood Beyond the Yard, Sally Fernandez has penned the sequel Noble’s Quest, adding more sparkling thrills to “The Simon Tetralogy” she is authoring.Major earth shaking events in Europe and the USA converge to fuel Interpol and the States Intelligence Agency to join forces. Although seemingly detached, the threats prompt Noble Bishop, Director for the SIA and Enzo Borgini, Executive Director of Police Services from Interpol, to conduct joint investigations. Leading edge technology is used to unravel the labyrinth of connections. The events are not coincidental. The enormous risks facing the USA and the world eventually draw the newly-elected president into the picture. Land grabs, political manipulation, and a terrorist camp, along with sea changes in the American psyche are skillfully woven to form a tapestry of intrigue. The widely sought mastermind of the global terrorist threat adds a breathtaking twist that lends even more intrigue to the narrative.

Written in the author’s patent style, readers will be beguiled by the artistic marriage of established facts with a storyline that lifts creativity to new heights. Readers will be challenged to separate fact from fiction, in the true Fernandez style.