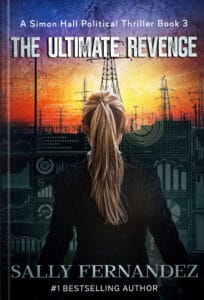 The Ultimate Revenge is the EXPLOSIVE conclusion to what was the “The Simon Trilogy.” With the next novel in the works, the trilogy has morphed into a tetralogy that will continue to hold political thriller readers tightly in its grasp. The author’s earlier books,Brotherhood Beyond the Yard and Noble’s Quest, provide an exhilarating platform for the launch of this final chapter of a gripping narrative that challenges the reader to put the book down.

The ever-elusive Simon’s daring escape from a high-security prison allows him to add unheard of dimensions to the classic cat and mouse game he has played with Noble, the SIA Director. The manhunt for Simon engages two geniuses and a collection of talented operatives, all immersed in a chase with more twists and turns than a rodeo bull. In the process chicanery and double-dealing at the highest levels is unfolded, continuing some of the manipulations of the earlier books.  Max, Noble’s trusted partner comes into her own, as she uncovers starling evidence and suggestive connections that reveal the nation’s power grids are at risk.

Of greater significance, are the hidden agendas of some of the world’s most powerful recognized leaders to pursue their goals toward a supra-national one-world government under the guise of global warming. Simon, the deposed President Baari, and the Jihadists find themselves sharing the same boat, each driven by separate motives but all resulting in a potential disastrous national emergency of huge proportions. The future of the United States is precipitously at stake. The capture of Simon becomes the highest priority as he continues to elude his captors with his usual bag of tricks. Meanwhile, Nobel staves off a massive national emergency with his technical prowess. Simon, finally cornered, provides an explosive ending to a fast-paced trilogy that is not for the faint of heart.

Fernandez has proved once again that she has mastered the art of blending fact with fiction, leaving the readers to make their own judgement. Whatever the outcome, it raises the inviting question, “What if?”